This tutorial is meant to work if you use it just as it says. There are a lot of calculations involving the resistor values for the transistor. You must use four 3mm leds or a total of 80mA in leds if you would like it to work as we have intended it to in this tutorial. If you stray from this you will get varied results.

The first thing you need to do is take apart your controller so you have just the board. Please check the link below to do this if you do not already know how:

Once this is done you will need the following items:

The next step is to get the leds into the Dome, this is by far the most difficult part of the entire mod. Once this is done you are smooth sailing.

In order to get the leds in there you must remove some of the plastic in the dome. We did this with a dremel like the one below. 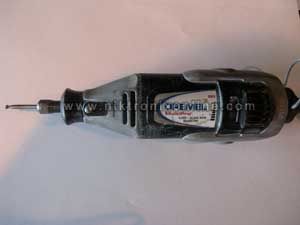 [/caption]
Once it was removed the dome piece looked like this (make sure to leave the center post b/c this is what actually makes the button work when it is pressed): [caption id="attachment_187" align="aligncenter" width="350" caption="Dome Cut"] 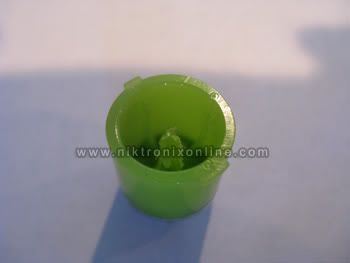 Now it's time to wire up the leds to fit into the dome. We found that four 3mm leds will light it sufficiently and eliminate any 'hot spots'.

Before proceeding here is a picture of what the ending led 'cluster' will look like. Take a look at how close things are so that they will fit into the dome when you are done:

Take the first two leds and lay them next to each other and solder their negative legs together, like show:

Now make another set like this with your other two leds and then join the ground points on each set of leds together so that it looks like this (you will have to trim the excess material away):

[caption id="attachment_175" align="aligncenter" width="350" caption="LED Formation"][/caption]
Now you need to connect all of the positive legs together along the outside of the cluster. You must be sure the (-) and (+) parts do not touch anywhere or you leds won't work. It should look like this now: [caption id="attachment_176" align="aligncenter" width="450" caption="LED Configuration"][/caption]
Once that is done you will need to solder on your (+) and (-) wires to the leds: [caption id="attachment_177" align="aligncenter" width="350" caption="LEDs with Positive and Negative Wire Attached"][/caption]
After that you need to put the leds into the dome. If they don't fit really well or 'drop' in like you might think then use a little force (not too much b/c you don't want to break them). Be careful because you have spent quite a bit of time to get to this point and you don't want to waste it all. Once it's in it should look like this: [caption id="attachment_178" align="aligncenter" width="350" caption="Dome with LEDs"][/caption]
Now solder them to the appropriate power and ground and power spots in the controller. Be sure to use the right resistors with them or you will burn out your leds. The voltage at the points in the controller that we use varies from 3.15-3.5v. Use this number to find your resistor value.

If you want to add a switch to the controller so that the lights don't waste your batteries when it is off then continue on with the tutorial.

We are going to use a transistor and make it act like a switch. Basically there is a switched voltage in the controller that will tell the transistor when it is on or off and then allow the current to flow through the leds when it is on. This is the basic concept.

Then you need to place the transistor as shown in the following picutre (be sure to note which way the curved surface of the transistor is facing. It is very important) . Place the 'bottom' leg through the first of the three holes, this is the ground we will use for this application. Then solder the middle leg to the other end of the resistor that you soldered a couple steps ago. Make sure your setup looks really similar to the one shown.

Once this is done then you will need to solder power to your leds. Take the appropriate resistor or the one given and solder it to this point and then solder your positive wire from your leds to the other end of the resistor. It should look like this:

Once this is done you only have to solder the negative wire from your leds to the last leg of the transistor (the one that hasn't been used yet). It should look like this:

Now you have finished. Test it out and watch it light up.