Be the first to review this product
$34.99
Out of stock
SKU
X360NYKOINTERCOOLERFAN
Add to Wish List
Nyko intercooler ts for your xbox 360. Cools your xbox 360 according to the temperature. Has been shown to effectively work!!
Skip to the end of the images gallery 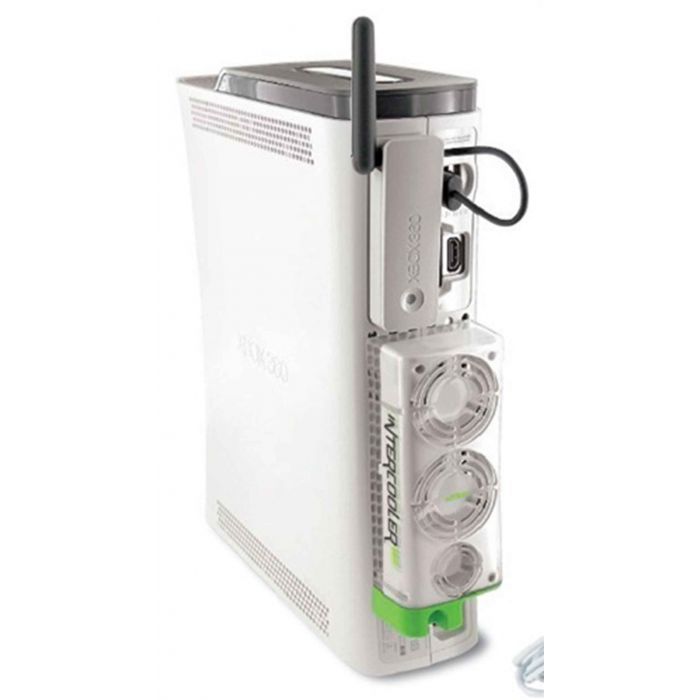 Skip to the beginning of the images gallery
Customer Images
You may upload your own images that portray this specific product being used. We do ask that you do not watermark them in any way and such images will be declined. Images that are accepted may be used as product images, in tutorials, or other related articles. By uploading an image, you accept to these terms. These images may not directly represent the product on this page. The items shown may have been modified/changed and the images are shown for demonstration, ideas, and creativity only. Colors depicted in the photos may also be "skewed" from difficult nature of capturing true light colors with a camera.
Details
Temperature Sensing Cooling Device for Xbox 360

Â TempSmartÂ technology automatically controls Intercooler operation to ensure optimal console environment
Â AC powered; no batteries or USB cables to the console necessary
Â Snap-on installation means no tools or other modifications are required
Â Can be used with the Xbox 360 in either vertical or horizontal position

Utilize NykoÂs cutting edge TempSmartÂ technology to keep your Xbox 360 console running at optimal environmental conditions with the Intercooler TS. The Intercooler TS provides increased air flow away from the 360 which allows the console to perform in a cooler, better ventilated environment ideal for cramped entrainment centers. No internal modification of the Xbox 360 is required. NykoÂs TempSmart technology automatically powers on the IntercoolerÂs fans when needed, and continue to cool the console even after the system has been powered down till a proper ambient temperature has been reached. The Intercooler TS is powered by a sleek AC adaptor, requiring no batteries or USB cables, allowing for a clean and easy installation, perfect for any home entertainment set up. The design of the Intercooler TS blends seamless with the design of the Xbox 360 console, and works in both the horizontal and vertical position.