The first thing you need to do is take apart your controller so you have just the board. Please check the link below to do this if you do not already know how:

How to Open The Xbox 360 Controller

Once this is done you will need the following items:

Once you have all the materials and the controller apart then it is time to begin.
Step one - Wiring the SMDs - Repeat this step 4 times, once for each button

The only tricky part about this mod is solder the two wires to the smd, but if you can do that you are good to go. I will help explain the best way to do it. First put a little bit of solder on your soldering iron and then pick up the smd and look at the bottom of it (where the pads are you solder to). Touch each side with the soldering iron (has a little solder on it) so that you can put a tiny bit of solder on each side of the led. Once this has been done then you will need to get your wire (preferably 30 awg). When you have your wire out, strip a very small amount of the insulation off of one end. 'Tin' the end you stripped with solder (put a little solder on the wire). Do this same thing to the other wire. Now get your SMD back in the tweezers and look at the pads you have 'Tinned' already. You will need to touch the wire on the out side of the SMD and just heat the smd and the wire and there should be enough solder there to melt them together and make a good connection. It may not look pretty, but it will get the job done!!! Do this for both wires. It should look something like this. 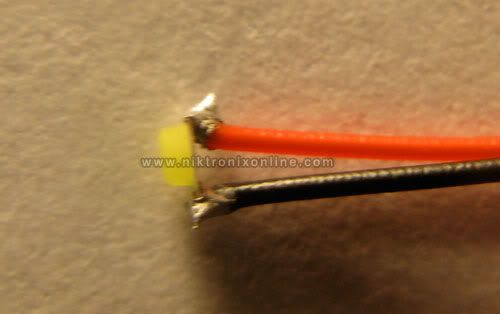 Now that you have it wired up you need to put the smd into the button. You can fit it into the button like this. Instead of placing the wires coming out of the buttons like shown you will need to cut out a little slot (different than the one shown) for the wires to go through. Once this is done you will not even be able to tell there is a light in there when you press the button! Again please read what was stated just above and do not do what the picture shows, but cut a different (new) slot. This can be done with a dremel or wire cutters. You may also use a dab of glue just to hold the smd in place inside the buttons. Just use a small amount and don't let it get above the four posts show or the button will not press right. 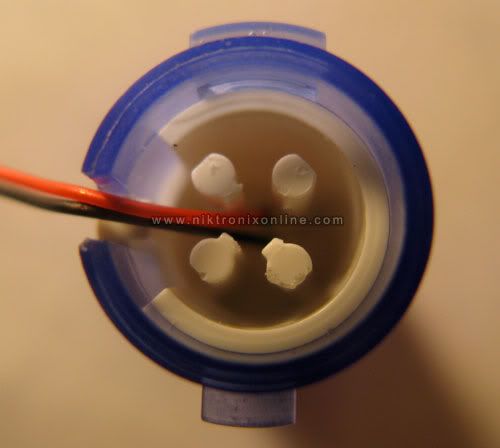 Where to get Power in the Controller - Make sure you choose the right resistors so you don't burn your leds out for your specific setup.

Now carefully put it all together, making sure the wires are out of the way and test it! You will get something like this if it's done correctly!