What you will need:
Removal of old SMDs/Lights
There are two ways to remove the SMDs/LEDs that are on the board (excluding the middle one).
The first is take a pair of small pliers and firmly grip one of the larger SMD's and 'rock' the pliers back and forth and the SMD will come off. This is by far a lot quicker and this is how we typically do it. You must realize that with this method you risk tearing up a pad. If you do that then you will be in for a repair that is very difficult.
The second method is what we like to call 'floating' the SMD off. This involves putting a decent amount of solder on the tip of your iron and then dragging it across the back of the SMD where all three solder points are. You want to melt all three connections at the same time otherwise the SMD will not 'float off'. Do not apply excessive pressure to the SMD with the iron (a tiny bit is acceptable, but not a lot) otherwise you, again, risk tearing up a pad. Sometimes adding a little bit of solder to each end of the SMD before trying to 'float' it off will help considerably.
Once you have all four of the outer lights off then you can focus on the middle light. You MUST use the float technique for the middle SMD otherwise you will definitely ruin the pads. Take your time and be patient. Do not apply hardly any pressure at all between the iron and the SMD. Once you have all of the lights off make sure the pads pads are flat (don't have solder sticking up). This is what the board should look like after the lights have been removed. 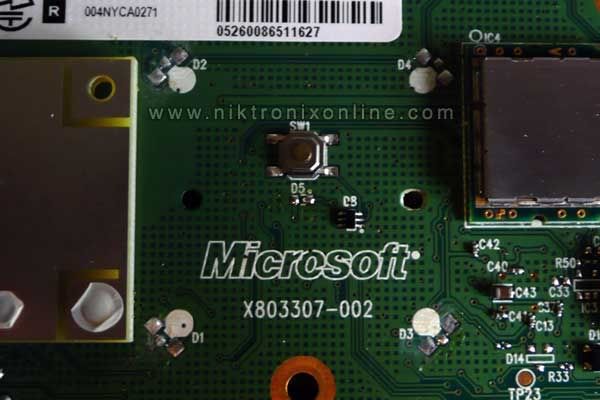 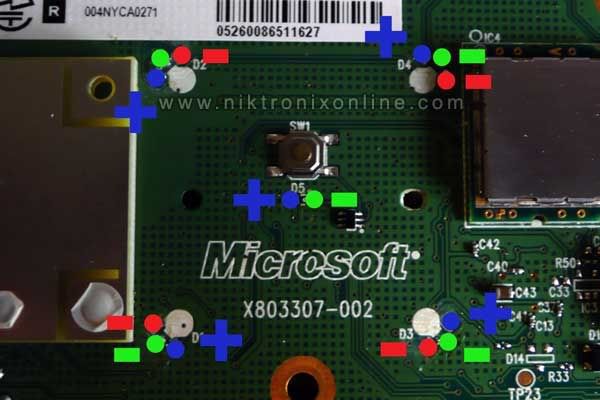 [/caption]
Installation of 0603 SMD Replacement Lights
After all of the original Lights are removed you must then put on the new ones. First lets put on the four outer lights. Get out your SMDs that you have purchased and remove only one of them at a time, otherwise you will most likely lose one. When you have one removed pick it up with the tweezers and look to see which side is positive. Now that you know the orientation of the SMD, position it accordingly for installation with it laying flat (lens facing directly up). We are going to solder the positive side first so add a little solder to the + pad that you are going to solder to first. Grab the negative side of the SMD with tweezers and hold the positive side of the SMD just in front (front as in closer to the center) of the positive pad on one of the four corners of the board (the middle pad, of the three, is the ground you will use). Once you have it in the position you want, hold it tightly and melt the solder that you just added to the pad and push/pull the SMD into the solder slightly so it sticks to the SMD. Remove the soldering iron and let the solder cool down and harden then remove the tweezers. It is important to remeber that you should not apply heat to the board or the SMDs very long or you could cause damage. You should only apply heat for a couple of seconds at a time at the most. Repeat this process for all of the corners.
Now for the middle light. This one is fairly simple. One of the things that will make this one easier is to make sure you don't have mounds of solder on the two pads in the middle, but insead it should be flat. Once it is like this then pick up an 0603 SMD you would like to place there and find the correct orientation. Then pick it up from the to with your tweezers and hold it on the middle pads (evenly spaced) and heat up the solder on one of the pads so that it sticks. 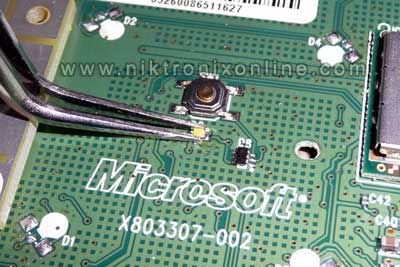 If you can pull the tweezers while holding it and if doesn't move then it is stuck (only need enough so it doesn't move). Now solder the other side by adding solder and heating it at the same time. Once you are satisfied with it then go back and to the original side you solder. If it looks good then you are done! Now you can install it and see how you did. Depending on how you decided to solder on the corner lights your board should look something like this: 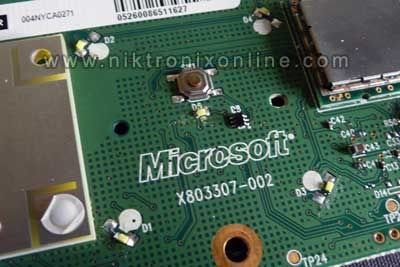 Continue if you want to add error lights, otherwise install and test your board
The error lights aren't too difficult. There is a slight trick though. You must solder the negative side to the secondary negative pad on the outer lights. If you have done it right so far it will be the pad that you have soldered to out of the three. Once you have the negative solder it will look something like this: 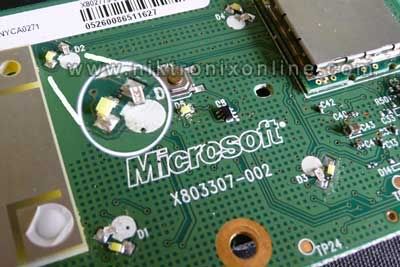 If you have finished the above part then you must apply power to the SMD's now since you just finished soldering there ground connections. The power will come from the blue dot in the image viewed earlier in this tutorial. You must take a strip of kynar wire (30 awg) and then tin it with solder. Hold the wire across the positive pad so it also touch the positive part of the error light. Then melt the solder on the positive pad so it gets tacked down or held in place. See the picture below.

Once it is tacked down then trim the wire with wire cutters and then solder the end that attached to the positive part of your error light. Do this whole process for each error light. Once you have finished that you are done and ready to test your new custom piece. 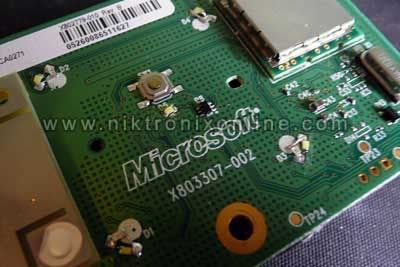